Eager to expand its presence in an established market, Wentworth Property Company acquired a mom-and-pop self storage facility in San Antonio, Texas, that was well occupied despite being a class C facility. The team knew with a little renovation, expansion and unit remix, they could bring the dated facility back to life and maximize its revenue stream. Rather than taking the all-consuming and costly approach of traditional construction, they adding 7,700 rentable square feet with 82 Drive-up MASS Units to the underperforming (and awkward) rear parking lot.

“We added 7,700 rentable square feet of portable storage units to our CubeSmart facility. In this market, you can rent them around $1.30 per square foot. That’s a much higher rental rate and you’ll quickly see the potential to double your returns.” 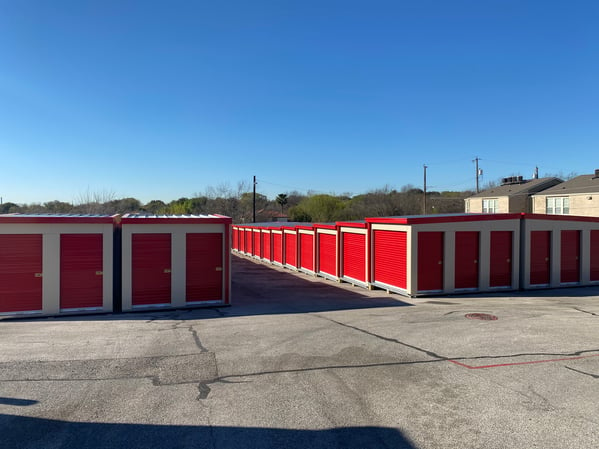 It’s no secret that portable storage is the fastest way to strategically expand your self-storage facility at a fraction of the cost when compared to traditional construction. That’s right, No more general contractors, sub-contractors, or lengthy construction delays… Portable storage is an all-in-one solution that limits the work you have to do in order to get additional storage units up and running as quickly as possible.

The best part? You don’t have to sacrifice quality when you commit to a quick and less expensive solution for expansion. Portable storage units can provide the same look and feel as traditional self-storage, blending in seamlessly to existing units! To the untrained eye, most don’t even realize the difference.

Wentworth chose American made MASS units that are built from the same durable components designed for Janus self-storage. With features like diamond plating, customized color options and insulated roofs to regulate the Texas heat, these units were strategically designed to meet Wentworth’s every need, from aesthetics to functionality. Not to mention, these potable units work in all kinds of situations which really helped Wentworth hurdle some obstacles during their renovation process.

Problem: Under Performing Rear Parking Lot, Sloping Significantly From the North to the South

The biggest hurdle Wentworth faced during the renovation was with an under performing (and awkward) rear parking lot that was sloping significantly from the North to the South. This lot was previously used for boat and RV storage; however, after conducting a market analysis, the team learned that it wasn’t serving the demographic needs in their area and that they could increase their revenue stream by offering drive-up self-storage units instead. 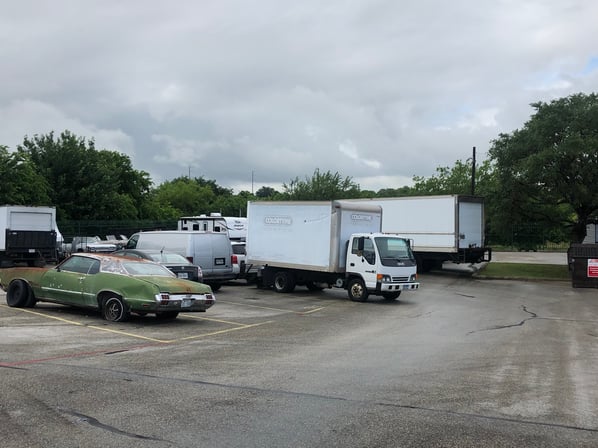 That’s when Wentworth brought in 82 drive-up portable MASS units to remix their under-performing parking lot. These units easily accommodated the sloping land with their adjustable bases, saving Wentworth significant time, money and resources in comparison to renovating this area with traditional ground-up construction.

With the addition of several unit sizes, they were able to better target the demographic needs of the San Antonio area and offer units that would be most profitable to their facility. After all, not everyone needs a 20′ long unit. That’s the convenient perk to portable storage – they’re configurable on a 10′ x 20′ platform, allowing you to pick and choose what unit sizes work best for you and your facility. If trends change, not a problem – your moveable units can too! 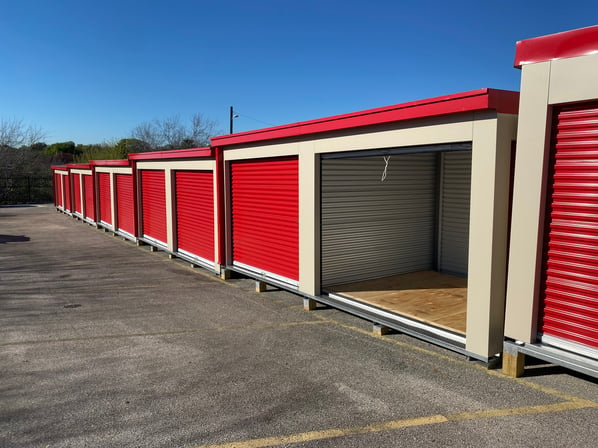 Because of their American made quality and drive-up convenience, Wentworth was able to charge a higher rental rate for their portable storage units. This helped to quickly increase the facility’s revenue stream. In just 4 months after opening the renovated site, the CubeSmart facility is rented at 85% occupancy and has no intention of slowing down.

What did the permitting process look like for portable storage?

Portable storage units are technically classified as equipment, and can often help you bypass the lengthy permitting and zoning processes; however, every county is different, so be sure to check local ordinances just in case.

As for Wentworth, they’re big on getting approvals from municipalities, and suggest you be too if you see an eventual sale in your future. Since the city is used to reviewing plans for traditional buildings, and moveable structures certainly are not, this can take some extra time if education is needed. With the help of your Architect, Engineer, and of course Portable Storage Provider, you can get the city exactly what they need to streamline this process.

Wentworth showed the city existing landscaping, lighting, wind-loads for portable units, and other related factors throughout the process. After making a few upgrades and accommodations, their Site Plan and Formal Building Permit were approved and they were off to the races from there! Once portable storage units are approved, they’re quickly installed and ready for immediate lease-up.

Your premier source for self storage information and the resources you need.

It all starts with the SBOA newsletter.